Below are just a few of the previous fun Houston Mopar Connection Club activities in the years since the early 1990's!


Come on down and join in the fun!

The Mopar excitement was GREAT!

The Nickens Brothers Racing Team showed up! Scott Geoffrion and Darrell Alderman were out testing the cars, and raced each other! They had a big trailer in the race sataging area and met with Mopar fans. 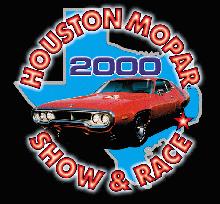 We had over a $5000 Race purse and over 70 trophies in every category you can think of, including Dakota trucks!

The Houston Food Bank will benefit from a donation we will make to them from revenue generated at the Show ansd Race.
Check out the 2002 Show and Race pictures!

HMCC donations made possible by the 2001 Show and Race

The 2002 13th Annual Houston Mopar Show and Race at Houston Raceway Park was fantastic!
Thanks to all who helped make this event successful!

Pictures from the October 5 and 6, 2002 event are posted.[off-site pictures may go offline]

The 2004
Houston Mopar
Show and Race
was great! 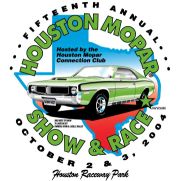 
Thanks to all for your support!
Our 1st Annual Halloween Classic Car Show
held on October 25th was a huge success! 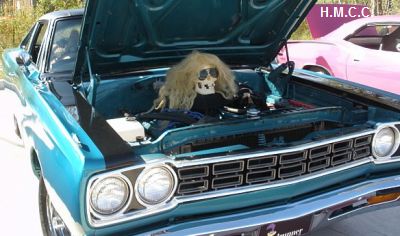 October 24 2nd Annual Halloween Car Showwas GREAT! Almost 100 vehicles were entered and we had unbelievably nice weather. A good amount of money was raised for charity. THANKS for your support!  View pictures and details and see an additional 300 plus photos! -- Charities Acknowledge Support by Houston Mopar Connection Club's 2009 Halloween Car Show


Channel 39 TV broadcast from their Anything That Rolls show coverage at The First Annual Andrew Erickson ALL MOPAR Memorial Car Show in Katy at Allen Samuels Dodge.

April 30, 2011 - HMCC Members at the 20th Annual (and final) Budweiser Brewery Car Show. Thanks to James Thames for the photos!

May 2, 2011 - HMCC Members at the Aeros and Auto's show. at Ellington Field. Thanks to James Thames for the photos! See lots more photos (all makes)

May 21, 2011 - Club members and Mopars at the 1st Annual Houston Area Construction Industry Auto Show Thanks to James Thames for the photos!

May 12, 2012 Several club members attended the 2012 Aeros and Auto Show at Ellington Field.

Condolences from the Houston Mopar Connection Club to the family of Jerry Tomasello of the Blast from the Past Street Machines of Texas. Jerry passed away December 8, 2013.   R.I.P.  -- View Memorial Information.

October 26 - The 6th Annual Halloween Classic Car Show was great!
THANKS for your support to make the show a success and help charities: The Star of Hope, The DePelchin Children’s Center, The Houston Food Bank, USO, Harris County Sherriff Department Teddy Bear Program, and The Shriner's Burn Hospital.

THANKS to the 2013 show sponsors and vendors.

In Memoriam March 2014: Our condolences to club member Matt Clark on the passing of his wife Jodie Karen Lowry-Clark Her journal is online for viewing.

As a result of the people who supported our 2014 Halloween Car Show and the club members who helped make the show happen, over $7,000 was donated to many non-profit organizations, including: the Houston Food Bank, Star of Hope, Shriner's Children's Hospital, Depelchin Children's Center, Harris County Sheriff's Reserve Teddy Bear / Easter Bunny program, Animeals, and the McPherson College Scholarship Fund.

October 24 - The 8th Annual Halloween Classic Car Show was rained out and held on March 12, 2016 as a combination Easter / Halloween show, or Easterween event. 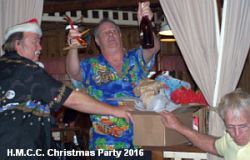 May 12 - Club Picnic (No photos available)

Thank you letter from the Blue Star Mothers of America Inc., for the H.M.C.C.'s donation from proceeds from the 11th Annual Halloween Classic Car Show

Most of the club's monthly meetings and all the usual club events were canceled because of the coronavirus COVID-19 pandemic.

Check out the Current HMCC Activities