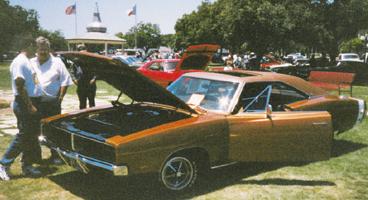 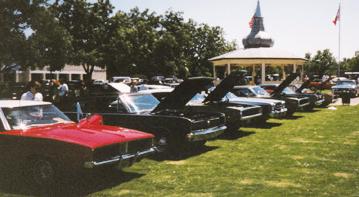 The storm that came through Friday night made Saturday extremely pleasant with unseasonably cool weather so everyone could enjoy viewing the many fine Chargers present and talking with others about the many aspects surrounding them. Wayne Wooten, who founded the Charger Registry, raved about his delight with the Texas show and was extremely thankful to all of the people who came out and displayed their Chargers. He was left speechless to say the least, and without his help and Wes Pieper's, this event just wouldn't be what it is today. A enormous thanks to these guys who have gone out of their ways to put on this event and give the Dodge Charger the recognition it deserves. In conclusion of an afternoon photo shoot the cool air was especially noticed when about 4-O-clock, the owners mounted there trusty steeds for a two hour cruise through the Texas Hill Country and various stops at such namely towns as Comfort, Texas, where people enjoyed a cool wet liquid or iced cream. Later, we all gathered poolside for some Texas style BBQ and friendship with other Charger owners. After dinner we all decided to go cruzin through Boerne for a scene of the nightlife and wound up at the DQ for some cool treats where we met several Charger owners. Upon return to the hotel, we gathered in the lobby to watch some videos that Wayne Wooten had brought of other Charger shows around the nation. Well it was getting about sleepy time, so it was time to head to the room, but we got sidetracked by a festive party going on in one of the rooms. Low and behold, it was more Charger owners celebrating a great time with friends. So we hung out there for a while, and later went to bed. A couple of hours later, we woke up and had breakfast at the hotel and later headed back to the Sunday show.

Sunday brought misty rain, but that didn't hamper the diligent Charger owners. The attendance still reached about 40 cars, and brought out a few that were not there on Saturday. The show went so well that the date for next years show has already been set and the anticipation for another day of food, fun and friends is overwhelming.